Cole Gintert began shooting skeet when he was 10 years old. He went through the Scholastic clay Target Program (SCTP) and National Skeet shooting Association (NSSA) sub-junior & Junior ranks. He picked up 5 SCTP National titles, 2 NSSA JR world titles, and numerous State (Ohio) JR titles along the way. During his time as a Junior skeet shooter Cole was also a competitive wrestler amassing more than 100 varsity wins in his career. After graduating high school, he dedicated himself to skeet shooting. On His 18th birthday, he became an NSSA certified level 1 instructor. Cole has been able to mentor youth shooters and some new adult shooters. He plans to continue to grow the sport as an instructor and resource for new & current shooters and show them all the amazing experiences skeet has to offer. Cole is currently on scholarship at Bethel University in McKenzie Tennessee. Where he is a member of the Clay Target shooting team. While his first love is skeet, when competing in collegiate tournaments he will also be competing in trap and sporting clays events. He is very proud to shoot a gun that is made in the USA.

“My Kolar shotgun gives me ultimate confidence in my shooting, I feel it gives me a competitive advantage!”

He recommends a Kolar shotgun to anyone looking to improve their clay target shooting. He has worked with Elite shotguns to facilitate the introduction of numerous shooters to the Kolar shotgun. Be sure to come say hello when you see Cole at the next shoot.

Equipment:
I have a Max Lite skeet, .740 bore, 30″ with carrier barrel, and a custom stock. I use Pilla shooting glasses with 5 lenses. when practicing I will use my reloaded ammo, and for competitions, I will most often use federal ammunition. To hold my shells I use a lonesome Charlie shooting pouch. 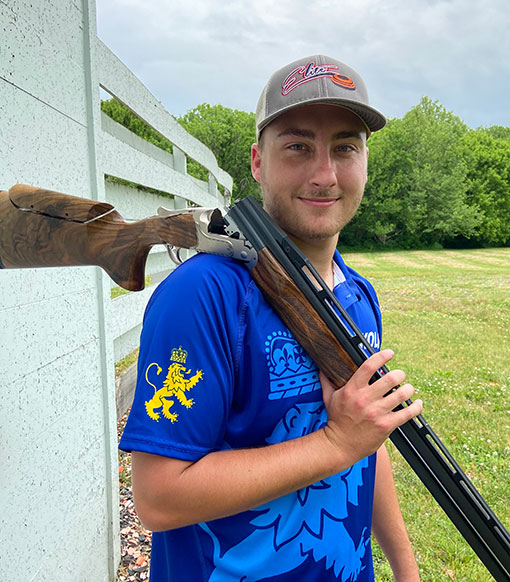